Posted by Alpha Omega Institute on Dec 6, 2013 in Marianis from the Front, The Biggest Challenges to Evolution | 1 comment 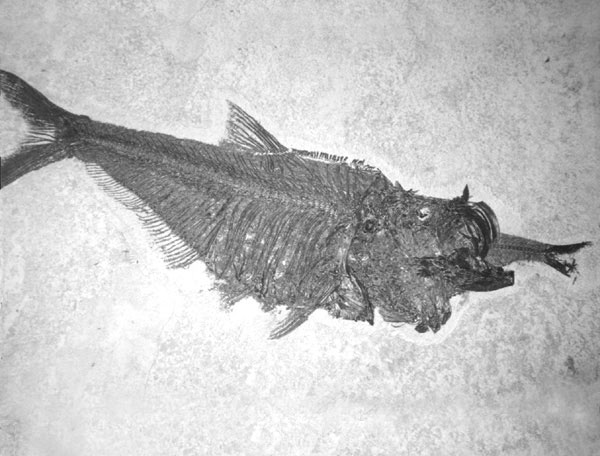 The fossil record is made up of layer after layer of rock that has been laid down by the different water currents before, during and after the flood. The fossils found within the layers are the animals that have been caught up and buried rapidly in those sediments. As the sediments build up during the flood, a sorting happens, which is natural.

Lower layers, like the Precambrian, will have smaller organisms that are less able to move and escape the landslides and sediment deposits amidst the swirling flood waters. The organisms that are faster, yet still slow, will be buried next. Then larger and more mobile organisms will be able to swim or run uphill or climb higher, until they are eventually submerged and buried.

It also depends on where and when the muddy sediments sweep through and engulf a specific environment. We see evidence of large schools of fish all swimming together and buried instantly. Chances are you may have seen evidence of rock layers where the sediments have been swirled and smashed together leaving a concrete of smashed up fossils, often shelled organisms, which is evidence of a destructive flood, not slow burial over long ages.

So what are the fossils? “Precambrian fossils included bizarre organisms too different from Cambrian animals to be their ancestors.” The organisms found in the Cambrian turned out to be “fossils of all the animal ‘crown groups’—those groups most different from each other and thus from the most distant parts (or “crown”) of the animal ‘family tree.’” So this diverse amount of organisms would need to have evolved but “the ancestors of all 30–40 major animal groups (phyla)” are simply missing![i]

The basic premise of evolution is that things change slowly over long periods of time. “Without the time, the formula cannot work, and yet Cambrian fossils are a parade of well-designed creatures that lived at the same time, not in separate evolutionary ages.” Evolutionists are forced to come up with ideas as to how they could have evolved, and some suggest “that animals were actually alive and evolving 800 million years ago. But without the fossils to support their story, why should other scientists believe it?” [ii]

Evolutionary studies of the Cambrian explosion are on the verge of being more story-telling rather than scientific since there are so many unknowns and there is no known mechanism for change, just guesses.