Genesis 1:1 In the Beginning God…

Posted by Alpha Omega Institute on Jun 15, 2012 in Stepaneks from the Front | 0 comments 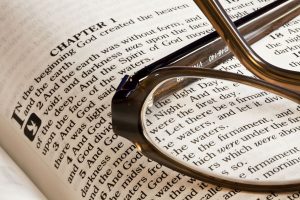 This is a very scientific statement.  This statement deals with the ‘Law of Cause and Effect, or the Law of Causality’. For example, if I drop a ball, the ball will fall and hit the ground.  The effect is the ball falling and hitting the ground.  What was the cause?  What caused the ball to fall?  It was gravity, so gravity is the cause.  Now, what caused or made gravity?  How did gravity get here?  Eventually we need to start with what we call a ‘first cause’, something or someone that had to make and/or create everything.

What is this first cause according to some scientists?

Discover magazine April 2002 tells us that the ‘first cause’ was evolution.

‘The universe burst into something from absolutely nothing-zero, nada.  And as it got bigger, it became filled with even more stuff that came from absolutely nowhere.  How is that possible?  Ask Alan Guth.  His theory of inflation helps explain everything.’

In other words: Nothing did something to nothing to make everything.  For evolution, nothing is the first cause.  But nothing has no intelligence, no power, and no presence.  This idea of something coming from nothing violates the ‘First Law of Thermodynamics’, which states that matter and energy can neither create nor destroy itself.  Evolution violates science!

Genesis 1:1 ‘In the beginning God…

In Scripture, God becomes the first cause.  God is omniscient, omnipotent, and omnipresent.  A being with these attributes would have no problem creating things out of nothing.

This brings us back again to Genesis Chapter One.

Day one or the first day of creation starts on Genesis 1:1.

Genesis 1:1a, In the beginning God…

The word “beginning” is a reference to time.  God created time, so this means that God is outside of time.  He does not function in time like we do.  Some people do not understand this concept so they tend to misinterpret II Peter 3:8.

Please join me again next time, as we continue in Genesis chapter 1.