Which Age is True?

In this picture, we find a lengthy list of age of the Earth estimates based on uniformitarian dating methods. All of the examples shown estimate a much younger Earth than 4.5 billion years. Now, an evolutionist would argue that the Earth goes through cycles over time and thus that is the reason for many of these dates appearing younger, but that is an unprovable assumption as we cannot directly observe the conditions of the past. We would also say that these dates are mostly inflated from a 6,000 year Earth history because mostly in part due to the massive effect that the global flood had on the Earth. Our view is also an unprovable assumption as we cannot directly observe the past. Thus whichever view fits the evidence best ought to direct which way we will place our faith (faith based on evidence). 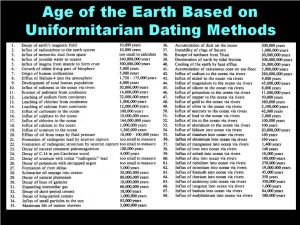