Posted by Alpha Omega Institute on Mar 10, 2015 in Marianis from the Front | 2 comments

“Genetic and fossil evidence indicate anatomically modern humans emerged in Africa around 120,000 years ago.”[i] Humans first developed simple things initially made out of rock before other materials were discovered or created. This Stone Age lasted until around 3000 BC where humans began using bronze tools (the Bronze Age) and that led to the development of iron tools in 1000 BC (the Iron Age).[ii] The first pottery was created around 21,000 years ago or some suggest even 26,000 years ago.[iii] Humans have been controlling fire for 800,000, but only started farming 12,000 years ago.[iv] 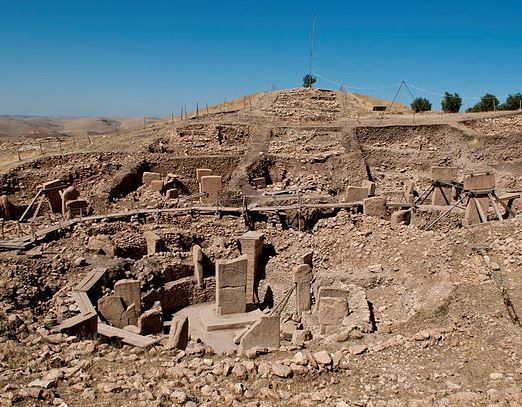 This photo is licensed under the Creative Commons Attribution-Share Alike 3.0 Unported license.

Two unique and megalithic sites are Stonehenge, which is dated to about 5,000 years ago[v] and Göbekli Tepe, in Turkey, which is dated to about 11,000 years old. Göbekli Tepe, “the world’s oldest temple” is a bunch of stone pillars set up in rings “crafted and arranged by prehistoric people who had not yet developed metal tools or even pottery.”[vi]

An 8 inch bone flute dating to 35,000 years old is the oldest musical instrument ever found so far. The earliest cave art is from the Chauvet caves in France that have been radiocarbon dated to 30,000-32,000 years old.[vii] “The oldest sculpture of a human being” is the Venus of Hohle Fels, which is a 40,000 year old carved piece of Mammoth ivory.[viii] The sophistication and creativity of music and art, in part, gave Homo sapiens the edge over Neanderthals.[ix]

The Schöningen spears from Germany “are the oldest complete hunting weapons ever found…[at] 380,000 to 400,000 years old.”[xi] The oldest known tools are Oldowan stone tools originally found at the Olduvai Gorge in Tanzania.[xii] These tools are around 2.6 million years old and were actually created and used by Homo habilis. Tools may still have been used before this time, but these are the oldest found so far.

The age of these objects can be determined by the type of pottery or other objects that are there and by how many layers of sediment cover the object. Scientists often use Carbon-14 dating methods to date any organic material or remnants. The amount of ancient artifacts and the corresponding dates scientifically determined, completely refute the idea that the Earth is only 6,000 years old. There are many slow naturalistic processes like rock layer formation, tree rings growth, ice layers formation, mountain building, evolution and more that all coincide and demonstrate much more time than just 6,000 years.

There are also numerous historical records and ancient cultures that predate and have influenced the Bible.[xiii] Based on this and other archaeological evidences, it would be foolish to blindly believe the young earth perspective of human history.

by Kylie Steele and Brian Mariani