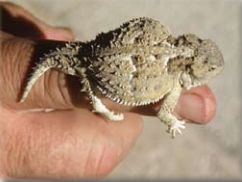 Horned Lizards are fearsome looking. Their heads are covered with a rugged row of sharp, pointed horns (true horns with bone inside). Longer pointed horns sticking out over their eyes give them a fierce dragon-like appearance. They have a very wide, squat, flattened body. The tail is short and wide where it connects to the body, tapering to a point on the end. The tail and sides of the Horned Lizard are edged with sharp spines made from special scales. Some of them have a double row of spines along their sides. Along the back are rows of short, sharp, cone-shaped spines.

The colors of a Horned Lizard are normally close to the colors of the dirt where they live. The head and back is usually a desert gray. Their body markings are in soft shades of brown, tan, yellow, or red. Their bellies are a pale, yellowish gray. They can change their colors from dark to light or from light to dark in only minutes. Their colors help them blend into their surroundings, making them hard to find.

When frightened, the first thing the Horned Lizard will usually do is flatten their bodies close to the ground and sit really still to keep from being seen. If this doesn’t work, they might run in short rapid bursts and then stop very quickly, hoping to confuse the eyesight of the one chasing them. If this fails, they have been known to fill their lungs with air, puffing up their horny body, making it look bigger and painful to swallow. They will also twist and throw their head around while hissing a lot, pretending to be meaner than they really are. Four types of Horned Lizards have another trick they use to protect themselves … they squirt blood from their eyeballs! By cutting off the blood leaving their head, the blood pressure in their head increases and bursts tiny blood vessels around their eyelids, causing the blood to shoot out. They can squirt a stream of blood from their eyes as far as 5 feet!  The flying blood not only confuses the hunters, but it also tastes real nasty to canines (dog kind) and felines (cat kind). The nasty taste of the blood doesn’t seem to bother birds. If the hunter still tries to pick up the Horned Lizard, it will try to poke the predator with its horns.

There are 14 species (types) of Horned Lizards in North America, 8 of which live in the United States. Some live in hot, dry deserts with sparse vegetation, while others live in mountains as high as 10,000 feet. Wherever they are found, they have common habits. In the fall, the Horned Lizards bury themselves in the loose sand or loamy soil, hibernating through the winter. They come out in the spring when the sun’s rays warm up the ground. The Horned Lizard spends the first few hours of the day basking in the sun, usually flattened against a rock or on a small mound, tilting their bodies towards the sun to soak up heat. As soon as their reptilian bodies warm up, they begin searching for food.

Most Horned Lizards feed on the slow-moving harvester ant, which makes up 60 to 90% of their diet. They do not chase their food hurriedly, like some lizards, but slowly creep up on it and neatly take it in with a flick of their long, sticky tongue. They might also feed on slow-moving termites, beetles, crickets, grasshoppers, sow bugs, ticks, and caterpillars. 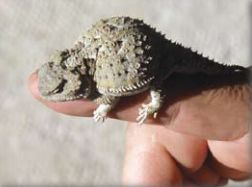 After feeding, when the ground temperature becomes too hot, they look for shade to keep from overheating. In the evening when the temperature begins to cool, they flatten their bodies, stick their nose in the sand and wriggle forward using the spines on their sides to scoop and dig their way into the sand. They may bury themselves 3 or 4 inches deep, or just leave the top of the head and eyes exposed.

If you ever get the chance to see a fearsome yet harmless Horned Lizard, remember that all its fantastic design points to a Creator. You might want to even say a prayer to our Creator, thanking Him for the wonderful things He has made!