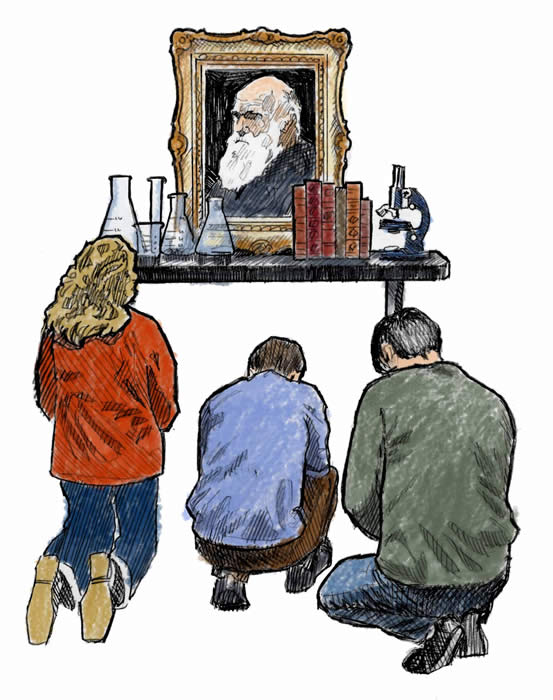 “The gods that have not made the heavens and the earth, even they shall perish from the earth and from under these heavens.”

I often find myself thinking about Jer.10:11 as I consider the importance and the seriousness of the creation message. The people of Jeremiah’s day were worshipping idols of wood, silver, and gold which they made with their own hands. God, through Jeremiah, points out the futility of their idolatry. He tells them: “Learn not the way of the heathen… for the customs of the people are vain. …(Jer. 10:2-3)

According to Webster ’s American Dictionary of the English Language (1828), one definition of a “god” is: “Any person or thing exalted too much in estimation, or deified and honored as the chief good.” An idol could be defined as: “Anything on which we set our affections…” An idolater is defined as: “…one who worships as a deity that which is not God.”

Most Americans today would not think of bowing down to a literal idol, but we have found that many people “bow down” at the altar of atheism as if it were a god. Others exalt the power of “science” and human reasoning above the Word of God. They exalt evolution over creation, chance over design, time as a miracle worker, and the power of natural selection over the power of God. How foolish! Romans 1:22-25 tells us: “Professing themselves to be wise, they became fools, and changed the glory of the uncorruptible God into an image made like to corruptible man, and to birds, and four-footed beasts, and creeping things. …Who changed the truth of God into a lie, and worshipped and served the creature more than the Creator, who is blessed forever.”

Some are just misinformed. They have believed the “vain customs” which have been perpetuated throughout society. They just don’t know that evolution has serious problems and that the scientific evidence can readily be interpreted in a manner consistent with Scripture. Others are more active in their fight against God – actively working to promote naturalistic evolution and atheism. In any case, though, they are putting the words of men and the reasoning of their own intellect above the unfailing, inspired Word of God.

So what can we do? First, God tells us not to “learn the way of the heathen.” We must be careful not to incorporate the godless thinking of the world into our Biblical faith. Instead, we should stand firm on the Truth. Then we can be salt and light in the world. We can pray for those caught in naturalistic thinking that their eyes will be opened. We can reason with them from the Scriptures and we can provide sound scientific evidence and interpretations that are consistent with Scripture. All of this, of course, should be done in a loving, Christ-like way. As it says in II Timothy 2:24-26: “And a servant of the Lord must not quarrel but be gentle to all, able to teach, patient, in humility correcting those who are in opposition, if God perhaps will grant them repentance, so that they may know the truth, and that they may come to their senses and escape the snare of the devil, having been taken captive by him to do his will.” (NKJV)

Ultimately, we need to recognize that this is a spiritual battle – a battle for the hearts and minds of children, youth, and adults. The dogmatic teaching of atheistic evolution provides an excuse which keeps many people from coming to know their Creator and His way of salvation, and it becomes a stumbling-block which causes others to fall away from their faith in God and His Word. The stakes are high. God will not be mocked. He desires “that all should come to repentance.” (II Peter 3:9) In the end, all false gods (including the “gods” of time, chance, and natural processes) will perish from the earth, and God alone will be exalted. We encourage you to worship and serve this One True Creator-God today!

Imagine what Noah felt like – knowing God’s plan for more than a hundred years building the ark and even the last seven days before the flood. And Noah was obedient, are we obedient to God’s calling on our lives? pic.twitter.com/Hnw3ykJJTN

It spews it’s guts – literally…but it regrows them – can you evolve to do that?? Evidence of Design! Watch more about that here: youtube.com/watch?v=EkTzQn… pic.twitter.com/f8yljlXl5v