Posted by Alpha Omega Institute on May 18, 2011 in Nuttings from the Front | 0 comments 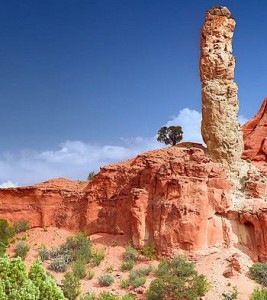 The name says it all, especially if you are familiar with the older slide film called Kodachrome. There is so much beautiful scenery there just waiting for the camera! However, to me it may be one of the most significant sites that we took our caravan of 40 to on the Jackson Hole Bible college geology field trip of the Southwest.

So what’s the problem? According to standard geology, the pipes of light-colored sandstone come from a layer of sandstone which is supposedly 25 million or more years older than the upper red Entrada sandstone. In 25 million years, the lighter sandstone should have turned into solid rock. In fact, this would have occurred in just a few hundred years. The fact that it squeezed up through the Entrada, tells us that it was not solid, but fluid at the time. That means that those millions of years never existed.

These features certainly fit with the rapid deposition of layers of sediments during the Noahic Flood, but don’t fit the standard models of geology.

Praise the Lord for the Godly life and legacy of Dr. John Morris! icr.org/article/dr-joh…

Jesus was with God in the beginning even before the Creation! pic.twitter.com/GAUkCn5dZ7

How Amazing That Will Be!! pic.twitter.com/YkbcqvkU3f

The wages of sin is death (Rom 6:23) – but Jesus overcame and we can have LIFE!! Believe it and have a beautiful beginning!! pic.twitter.com/7YB3PdkfUx

Now is the time to sign up for our Costa Rica Tour! Click below for detailed day-to-day itineraries with activities and hotel stays! Please share this email to your friends and family - Create Special Memories This Year!! discovercreation.org/camps-to… pic.twitter.com/QDERKfdW3p

Grasshoppers Have...Knees?? - Design! My first year teaching, I was...a lot nervous about leading dissections and how squirrely the freshman would be. But at least the first one was the simple grasshopper. Then I researched…woah! Amazing! discovercreation.org/blog/202… pic.twitter.com/aOQs1ky8KE

Merry CHRISTmas Friends! Remember the Real Reason and Let’s Remember God’s Word!! For to us a child is born, to us a son is given... Isaiah 9:6 ESV Therefore the Lord... Isaiah 7:14 ESV youtube.com/watch?v=E2kLHr… pic.twitter.com/dU9DbyWgew