Posted by Alpha Omega Institute on May 3, 2011 in Nuttings from the Front | 0 comments 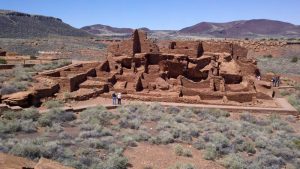 Heaps of rock where villages once stood, leftover pottery, various artifacts and drawings on the rocks are all that remain. What made these ancient ones abandon their homes, farms, and villages? Was it drought? Perhaps they fled from hostile tribes – or perhaps volcanoes rained down hot material on them.

Some people think the Pueblo and Hopi Indians are their descendants. No one knows for sure, but the place is now desolate except for the park officials and the tourists. 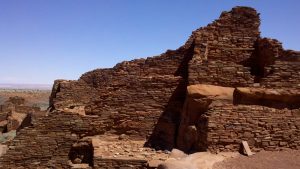 Where did they come from? Archeologists do not know, but the Bible gives us clues. Since they were human beings, we can confidently say that they were descendents of Adam and later Noah.

After the Flood, God told the people to spread out and fill the earth, but they refused to obey and instead, built a city and a tower that was later called Babel. Then God “helped” them obey by confusing the languages and causing Noah’s descendents to spread out over the face of the earth.

So, the Anasazi were descendents of Noah that found their way from Babel to the Americas. They lived and thrived for awhile in the American southwest more than a thousand years ago. They developed farms, cities, artwork, cultural traditions, trade routes, and religious practices.

Today we find remnants of their civilization, but much of their history remains a mystery. However this much we know – they were not “primitive” ignorant savages, but intelligent human beings, descendants of Adam and Noah, trying to make a living in a difficult environment.

People are Amazing! Right?? (Due to Evolution or Design? What do you think?) creation.com/people-are-ama… pic.twitter.com/v4Jh3m9Qy9

Not enough stuff to say for sure that there’s an Oort Cloud! creationresearch.org/comets-k… pic.twitter.com/vVt82xyblm

The Positive Case for Creation: Is there evidence to show that Creation Science is true? “When we examine the world, we find abundant positive evidence to support these claims. Here are just a few examples... youtu.be/It0GaRg2fW0

C-14 in Soft Tissue in Dino Bones!! This is evidence that these tissues could not be millions of years old!! See more here: icr.org/article/carbon… pic.twitter.com/7wD4vdZunx

Could you do two things?? 1.Equip Yourself! When you register, you will get a 10% discount for our Yellowstone Creation Christian Tours (Aug 26-30 or Sept 2-6, 2022)!! - discovercreation.org/camps-to… 2.Share with your Family and Friends! Register Here: DiscoverCreation.org/Online pic.twitter.com/XkS0GSvM7F

Sometimes we focus too much on the physical things in life! But where is the battle? pic.twitter.com/AL1ky4qLNb

“If you believe in equality, compassion, consent, enlightenment, science, freedom, and progress – then you are a believer in the supernatural.” Interesting book! We haven’t read it yet, but it sounds good – And so as with EVERYTHING, be discerning! usstore.creation.com/product/…

Many parents have expressed the Heartache of seeing a loved one walk away from their faith! Many say that they believe in Science rather than Religion. They are deceived! INVITE YOUR FAMILY AND FRIENDS – IT MIGHT RESULT IN THEIR SALVATION!! DiscoverCreation.org/Online pic.twitter.com/bvyKYlDnsf

Golf balls and swimsuits point to God the Designer!! youtube.com/watch?v=Sdik1K…