Posted by Alpha Omega Institute on Apr 12, 2011 in Nuttings from the Front | 0 comments 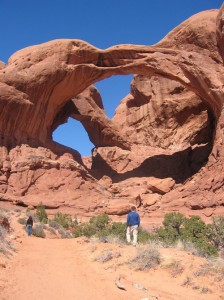 It is always a good experience for the students, on our 12 day field trip, to hear how the various philosophies are presented at the national parks.

The pictures in this blog were all taken at Arches National Park.  Because of our larger group, we had two ranger led hikes in Arches by two different rangers.

The first ranger was quite knowledgeable in geology and did a very good job in explaining the normal park perspective for the formations (which involves millions or even billions of years, of course).

The second ranger freely admitted that she didn’t know much about the geology, but rather that her reason to be a park ranger was to support environmentalism.

Even though I’ve heard a lot of environmentalism at the parks, this latter ranger’s philosophy was even greener than the uniform she was wearing.  She believed her worldview to the extent that she indicated she would not put her canteen into a water hole to get water, even if she was dying of thirst, since that act could disturb the ecosystem of the water hole. In her viewpoint, preserving the environment is more important than her individual survival.

Even though she believed in evolution, she would be neglecting the “survival of the fittest” mechanism for her own beliefs. I respect her right to her opinion. I would also agree that we should use our resources to their fullest extent without destroying our world. 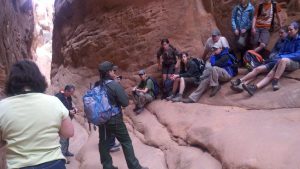 However, it is sad that such radical views expressed by this ranger are OK at the parks, whereas a ranger who may have a Biblical view is not allowed to express it on guided tours under the guise of “separation of church and state.”

I just saw this article – but although a couple weeks later – let’s practice Remembering the Past – Remembering God at Work!! therebelution.com/blog/2022/0… pic.twitter.com/n9VVjRkvyv

We pray that this is our approach in ministry and the hopeful result of our ministry! pic.twitter.com/Dn4Rirks2k

Can you answer these questions??...With a good answer?? Here is a great resource that answers a lot of questions! genesisapologetics.com/faqs/ pic.twitter.com/hHwNkqCZTP

Awesome testimony of God at work! Contact us to bring AOI to your church and let’s get excited about how God is working!! creation.com/great-commissi… pic.twitter.com/qEQc5HTXTQ

“Are there contradictions in the Bible’s accounts of Judas’ death?” Great Answer! And this shows another evidence that the Bible is trustworthy!! creation.com/judas-bible-co… pic.twitter.com/XJhC3jQf7g

Let us stay separate from the world! pic.twitter.com/Bh7HLB72eu

Let’s be diligent and truly handle His Word accurately! pic.twitter.com/QML5xcJ8Q5

Can you believe in both Evolution and the Bible?? Great Answer! - isgenesishistory.com/evolutio… pic.twitter.com/X379gg5oOx

Where are all the human fossils? -Vertebrate Fossils are very rare! -A human fossil would be hard to find. -Something that dies would rarely fossilize. -If humans died later in the flood, much of those later layers were eroded away! m.youtube.com/watch?v=jHKdC0…

Another verse confirming our ministry – teaching other about God, His Word, and His Creation! pic.twitter.com/wcb3ZI7Txm