Indian Drawing of a Mammoth

Posted by Alpha Omega Institute on Apr 8, 2011 in Nuttings from the Front | 0 comments 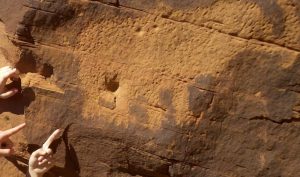 One of the places we just visited on our 12 day field study, we are leading for the Jackson Hole Bible College, is a place where the ancient native inhabitants drew pictures on the sandstone walls. Among pictures of animals we see today, such as: deer, bighorn sheep, and lizards, there is also a picture of a mammoth.

At first glance, this shouldn’t be a problem unless you view it through evolutionary glasses. According to what is traditionally taught, mammoths became extinct 10000 to 12000  years ago. The drawings on the sandstone were supposed to have been made no more than 200 to 1000 years ago. This throws the evolutionary ideas into turmoil.

Several years ago, Louis L’Amour wrote a book called Jubal Sackett.  In the book he mentioned that explorers coming across America saw mammoths and ground sloths. Since Louis Amor is considered a historically accurate novelist, his critics quickly pointed out that he wasn’t accurate since scientists know that these animals have been extinct for thousands of years.

L’Amour answered his critics in the American Horseman magazine. He cited actual documents in the archives of the Smithsonian Institute. Not only had the explorers seen them, but the native peoples actually had a name for them – the “Long-Noses.” 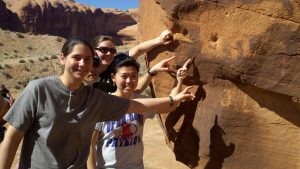 Once again, we find that scientists do not have the final say. Historical documentation is much more reliable. Think about that! We also have a very reliable historical record which tells us how the world and all the life in it began. It’s the Bible. I would rather trust it than all of man’s “scientific theories” which try to tell us that everything came to be by millions of accidents of evolution.

I just saw this article – but although a couple weeks later – let’s practice Remembering the Past – Remembering God at Work!! therebelution.com/blog/2022/0… pic.twitter.com/n9VVjRkvyv

We pray that this is our approach in ministry and the hopeful result of our ministry! pic.twitter.com/Dn4Rirks2k

Can you answer these questions??...With a good answer?? Here is a great resource that answers a lot of questions! genesisapologetics.com/faqs/ pic.twitter.com/hHwNkqCZTP

Awesome testimony of God at work! Contact us to bring AOI to your church and let’s get excited about how God is working!! creation.com/great-commissi… pic.twitter.com/qEQc5HTXTQ

“Are there contradictions in the Bible’s accounts of Judas’ death?” Great Answer! And this shows another evidence that the Bible is trustworthy!! creation.com/judas-bible-co… pic.twitter.com/XJhC3jQf7g

Let us stay separate from the world! pic.twitter.com/Bh7HLB72eu

Let’s be diligent and truly handle His Word accurately! pic.twitter.com/QML5xcJ8Q5

Can you believe in both Evolution and the Bible?? Great Answer! - isgenesishistory.com/evolutio… pic.twitter.com/X379gg5oOx

Where are all the human fossils? -Vertebrate Fossils are very rare! -A human fossil would be hard to find. -Something that dies would rarely fossilize. -If humans died later in the flood, much of those later layers were eroded away! m.youtube.com/watch?v=jHKdC0…

Another verse confirming our ministry – teaching other about God, His Word, and His Creation! pic.twitter.com/wcb3ZI7Txm