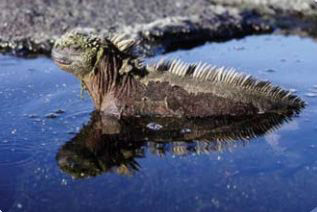 Marine iguanas are found only on the Galápagos Islands located in the Pacific Ocean near Ecuador, South America. They are the only lizards that are able to live and feed in the sea.

Marine iguanas are vegetarians. They feed on seaweed and algae which they find on rocks, in tidal pools, or in the sea. The adult males can grow to over 5 feet long and the females up to almost 4 feet. On land, marine iguanas are rather clumsy lizards, but in the water they are powerful, easy-moving swimmers. Their flattened tails and spiky dorsal fins are perfect for swimming. They have long, sharp claws they use to cling tightly to rocks in the strong currents and waves along the shore. Marine iguanas have flat snouts which makes it easier for them to scrape algae off the rocks with their sharp teeth.

The bigger marine iguanas (usually males) swim out past the waves and dive underwater to feed. They usually dive down about 5 to 16 feet, but some very large adults can dive up to 50 feet or more. They are usually underwater for just a few minutes, but have been known to stay underwater for over half an hour.

Iguanas are cold blooded so they need outside heat to warm their bodies. To help save body heat in the cold sea, the marine iguana’s blood moves away from the outside to the center of their body and their heart beat slows down a lot. Only the largest marine iguanas dive because larger animals lose less body heat. After the dive, they climb out onto the black volcanic rocks along the shore to bask in the sun and warm up again.

While underwater, marine iguanas are in danger of being eaten by sharks. The sharks have excellent hearing and can actually hear the heartbeat of an iguana up to 12 feet away. God gave the marine iguanas an amazing defense system to protect them … they can deliberately stop their heart from beating! They have been known to stop their hearts for up to 45 minutes without any harmful effects! Evolution teaches that the marine iguana somehow learned this trick by chance and accident over a long period of time to protect it from its enemies. However, that idea seems silly, because the enormous Komodo dragon, who has no natural enemies, can also stop its heart from beating. A better idea is that both of these lizards were given these amazing skills by God.

Scientists have seen the marine iguana’s body shrink in size when there is not much food around. Amazingly, they don’t just become thinner, they get shorter too (some as much as 20%). Scientists believe that not only the flesh shrinks but even part of their backbones shrink! Scientists saw that the more an iguana shrank, the less food was needed for it to live. When food became plentiful again, they grew back to their original size. 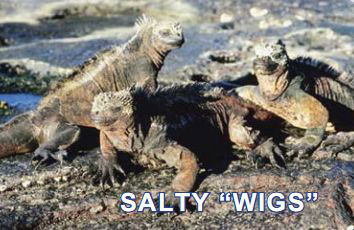 Eating or drinking too much salt is not only very unhealthy, it can actually kill you. While feeding in the sea, marine iguanas swallow a lot of salt water. To protect them from the excess salt, God designed a special gland in the snout of the marine iguana, between their eyes and nostrils. The gland filters the salt out of the blood, storing the salt in the iguana’s nostrils. Every now and then the marine iguana sneezes. The salt spray shoots up in the air and often falls back onto the marine iguana’s head, drying into a salty crust that looks like a white wig.

The marine iguana is a wonderful example of God’s imagination and His care for His creatures.

Originally published in the January/February 2011 issue of Kids Think and Believe, Too! Check it out for activities and a maze.