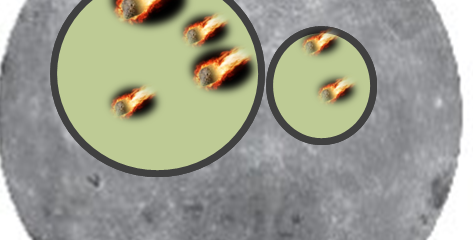 The surface of the Moon is pocked-marked by craters, but what is possibly the most interesting are the Ghost Craters! The moon’s black spots are the part of the surface that is made up of the rock – basalt. Basalt is a volcanic rock – formed due to lava flows. As you can see with the naked eye, those are huge regions across the surface of the moon that must have had huge lava flows.

Based on observations, it looks like the black spots or marias have formed due to huge asteroid strikes, and thus hot volcanic material oozed out of the interior of the moon to fill in the craters. What is interesting is that there are a lot of ghost craters or craters that are partially or mostly filled in within those large black marias – meaning that after the giant impact, there must have been many other impacts to form the smaller craters before the molten lava filled in the large crater making the black maria. And now the smaller craters within the maria are like ghosts within the black maria – partially visible, faint circles. Since the black lava flows have created the large marias, there have been later impacts making clear and distinct craters, but there are not that many newer craters.

All this to say that cratering appears like it has not happened slowly over billions of years, but quickly in the past – like a quick storm (possibly also triggering the worldwide flood on Earth) and less frequent since then. As is so often the case, we again see that the evidence does not need or point to billions of years of time.