Richard Stepanek was taught evolution in school and in church. He believed it until God opened his eyes to creation at a “Discover Creation” seminar. After extensive personal research on the subject, Rich became firmly convinced that the facts support the literal account of Creation found in the Bible. Rich joined Alpha Omega Institute as a full time speaker in 1997 and has taught both in the States and internationally. Rich has done extensive studies in Genesis and its relevance to the rest of Scripture, and loves to teach on this topic. His wife, Sue, often travels with him in the ministry.

The length of each  presentation is 50 to 60 minutes long. Some changes can be made to fit each  situation. PowerPoint is used in  each presentation (except for Creation Evangelism in Russia, Brazil, and Mexico  where slides are used)

*The ministry of AOI, including the speakers, is a support based ministry. This ministry cannot continue without God’s Work – including His Work in calling others to be a part of this ministry with finances and prayer. Be a practical part of the Stepanek’s ministry. Pray for them and Donate now designating your support to the “Stepanek Ministry Fund.”

Origin of Man and Cavemen

In this lecture we will take  a look at the evidence that evolutionists use to support their theory.  I will reveal some of the problems with this evidence.  I will also present the following: out of place human fossils, missing links that were mistakes or  frauds, biochemistry data that supports a common designer instead of a common ancestor, and how the cavemen fit in with Scripture.

The Origin of Life and the Glory of God

In this presentation we will study the ‘intelligent design concept’. The science of archaeology is based on this concept, and I will demonstrate we use this concept every day of our life.  Next we will explore the evidence for God’s handiwork.  We find complex design in nature, which only an intelligent designer could create.  According to mathematical probabilities and the science of chemistry there is 0% chance that evolution could happen.   So what is the alternative?  Come and see!

The Age of the Earth and the Fossil Record

In this presentation we will look at radiometric dating.  Is it really accurate?  Are there other scientific dating methods that give us a much younger age for the earth?  I will reveal the best and most accurate method to use for dating  purposes.

What about the fossil record, does it provide evidence for evolution or creation?  We will study some of the transitional forms (missing links) that are used to support evolution.  Do they really exist or are they still missing?  Next, I will present information about mutations (the mechanism that evolutionists claim caused one creature to evolve into another creature).   Are they truly helpful, or are they harmful?

When Mount St. Helens erupted, it blew the top off evolutionary geology.  The information gained from Mt. St. Helens has changed the way we view geological features in some of our national parks.  I will talk about the formation of fossils, coal, petrified wood etc. and present evidence  revealing that they can be formed in a short time, not over millions of years.

Dinosaurs and the Bible

We will explore the evidence that man and dinosaurs did exist together just as the Bible proclaims.  We will study the Scripture’s description of the unicorn, behemoth, and leviathan to see what they actually are.  God is not describing wild oxen, ponies, elephants, hippos, or crocodiles.  Did dinosaurs go on the ark?  If they did, how did Noah get those big beasts on board?  Well, come and see!

Which God is the One True God?

There are many gods in the world.  Which one will you put your faith in?  We will examine the scientific, historical, and prophetic accuracy of Scripture.   This slide presentation gives evidence that the one true God of the universe is also the God of the Bible.

Astronomy and the Glory of God

Does science support the ‘Big Bang’ theory?  Did the universe evolve by chance?  Stars that are billions of  light years away from the earth, do they proclaim an ancient universe?  We will cover these issues and many others. Discover for yourself that the heavens declare the glory of the God!

In the Nov. 2004 issue of National  Geographic there was an article titled ‘Was Darwin Wrong’.  We will examine Darwinian evolution in the light of empirical science. For evolution to be a theory, scientists must observe inorganic and/or dead material evolving into life,  mutations increasing genetic information (making new genes), and one kind (family) of creature evolving into a completely different kind (family) of creature.  Is Darwin’s ‘natural  selection’ a friend or foe to evolution?   So was Darwin really wrong?  Come and discover creation!

Why have so many Christians departed from the literal reading of  Genesis?  This session we’ll address the teachings of the Gap Theory, Day Age Theory, Theistic Evolution, and  Progressive Creationism.  We will also look at the consequences of compromise and what is at stake in these issues.

You probably  have heard the old line, “Evolution is science, creation is religion”.  If you hold to the idea of a literal six day creation you are made to look foolish, even in some Christian circles.  The world thinks that if you believe in creation, you have checked your brains out at the door. God calls us to reason with Him.  We will take an in-depth scientific look at the origin of life and see God’s handiwork in His greatest creation, ‘man’.  Science demands there is a Creator!  If it is impossible for life to evolve from non-life by chance and accident, I believe the rest of Darwinian  evolution is in question.  So if the starting point of evolution is false, what about the other aspects of  evolution?  We will re-examine the  evidence for Darwinian evolution and scientifically find it wanting.  The book of Genesis predicted 6,000 years ago the scientific information we have discovered in recent times.  God is real and He wants to work through you so the world may know that He is.  But it is not easy, so we are here to give you spiritual encouragement through the knowledge of His Word and creation. (a two part presentation)

The following presentations are used to supplement the above creation topics:

Stem Cells and the Folly of Dolly (Cloning)

Learn the difference between embryonic and adult stem cells and the interesting research behind it.  What is cloning?  Discover the problems encountered with Dolly.  Can humans be cloned?  These and other questions will be answered in this eye-opening presentation.

What you believe about the origin of life will influence your thinking and behavior.  We will examine how evolution affects our society in the areas of family, church, government, public schools, etc.  This lecture is designed primarily for young adults and adults.

Evolution is the foundation for the New Age movement.  By studying Scripture, we will discover that New Age is nothing new, but old age paganism spoken of in Genesis 3.  How has New Age thinking affected the media, medicine, schools, and even the church?  Well, come and see!

I will share highlights of my past missionary trips to Russia, Brazil, Africa, or Mexico, and tell about the effects of teaching creation in these countries.  I will also share details about the spiritual warfare and God’s guidance and protection during these trips.  God is still on His throne and in control of His creation!

Topics on the Scientific and Spiritual Truth of Genesis:

God proclaims His great power and wisdom in His creation (Romans 1:20).  I will go step by step through each day of creation explaining the great things God did on that day.  I hope to shed some light on the creation week for the glory of God. We will also discover that Genesis is relevant to our lives today, so to understand the science and events happening today we must understand the true historical account of Genesis. Your life and eternity depends on it.

There is often much confusion about chapter two of  Genesis.  Some people believe this is a second creation story.  As we examine God’s Word we will discover this is not another creation story, but a more detailed account of day six of creation.  God’s focus is on the creation of man and the events happening in the Garden of Eden.

In this presentation I will touch on the highlights of Genesis chapter three.  I will start with sin in the Garden and why death came through one man (Adam) even though the woman ate of the forbidden fruit first.  God’s plan of redemption is also proclaimed in this chapter.  When did Satan fall?  Were Adam and Eve saved?  Is the serpent – Satan using the same deception today to affect our thinking as he used on the Woman in the Garden of Eden? Come and hear what the Lord has to say!

In this presentation I will touch on the highlights of Genesis chapters four through eleven.  Why did God accept Abel’s offering but rejected Cain’s offering?   Adam begat Seth in his likeness and image, but not in God’s image – why?  I will talk about why Methuselah was the oldest man recorded in Genesis, and the meaning of his name was a warning to those who were living ungodly.  Who are the ‘sons of God’ in Genesis chapter six?  I will also cover topics from the flood to the Tower of Babel. Come and dig for gems in Genesis!

Creator on the Cross

Jesus is the Creator, the Saviour, and the Redeemer!   He was there in the beginning and this is where we will start.  We will follow ‘The Word’ (Jesus) through the Bible to see His creative power and the gospel message unfolding through the history of man.  Jesus Christ demonstrates His love for mankind in His creation and also in His salvation.  Jesus truly is the Creator on the cross!

According to the Bible Methuselah lived to be 969 years old.  Could humans really live to be that old?  We will study genetics, stem cells, and dinosaurs to see if it is possible for Methuselah to live for hundreds of years, and it was!

The Star of Bethlehem

What did the wise men see in Matthew chapter two?  Was it a star, a comet, or supernova?   Maybe it was something altogether different.  What clues are there in the Word of God to give us some insight to what it might be?  The Scripture reveals what they saw. So come and see for yourself!

When Were Angels Created?

The Bible reveals when God created the angels, but it is not in Genesis chapter one.  Why?

The Origin of the Religion of Evolution

Walk by Faith, Not by Sight

We cannot always trust our eyes and our brain, but we can trust the Bible.  This is an illusion presentation where I trick the eye and the mind.  I can make you see things that are not there, and make you not see things that are there.  Evolution is an illusion, because there is no observational evidence to support it.  I usually teach this lecture at the end of a long week of teaching creation.  By this time my students are about brain dead from all the scientific information supporting creation and Genesis, and they need something less scientific.

I present a short talk on the salt mines in  Hutchinson, KS.

I present a tour on the North American Museum  of Ancient Life in Lehi, UT. 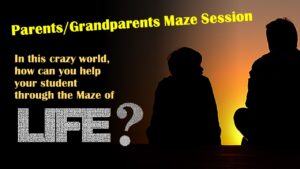 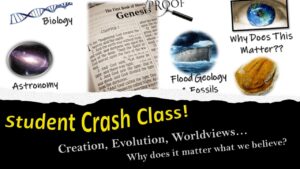 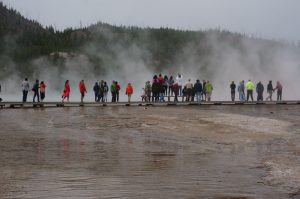