How Old is the Grand Canyon?

The Grand Canyon is a great example showing how scientists can look at the same evidence and (because of their worldview and assumptions) come up with very different conclusions.

In fact, it is interesting that most secular scientists believe that the Grand Canyon has been carving for the last 6 million years, but there are many secular scientists that instead argue for between 3-5 millions, and some that argue for 17 million years and some even argue for 70 million years of slow erosion. They are all looking at the same evidence, but putting more emphasis on different parts of evidence, but the fact that there is disagreement means that it is reasonable to conclude that none of those conclusions have to be the truth.

The lack of debris and the shape of the canyons suggest that it could have been carved quickly due to a massive torrent of water – maybe only thousands of years ago! This might be a better answer! 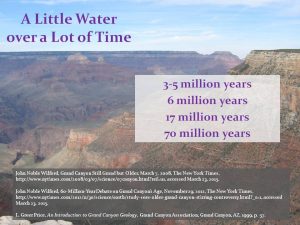 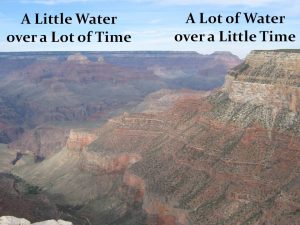