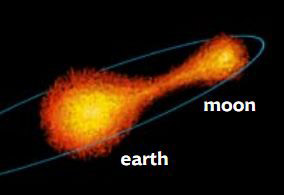 In Our Created Moon, Don DeYoung and John Whitcomb discuss four main theories suggested for a naturalistic origin of the moon.

The fission theory proposes that, while the early earth was in a molten state, a tidal bulge formed due to the sun’s gravitational pull. Eventually, this bulge separated or “fissioned” from Earth forming the moon.

For this to work however, it would require the earth to rotate 10 times faster than the present. Secondly, the materials of the moon are not a close match to the earth’s. Iron makes up 30% of the earth’s mass and only about 2% of the moon’s. Also, if the moon split from the earth as proposed, it should orbit in line with the equator. However, it’s orbit is inclined at an 18½ –  28½  degree angle.

In the capture theory, scientists proposed that the moon was wandering through space and was trapped by earth’s gravity. It sounds somewhat plausable but is physically problematic. According to DeYoung and Whitcomb, “there is no known means by which the moon’s velocity could be largely dissipated on a single pass.” Additionally, we would expect the moon to have an elliptical orbit. Instead, it is highly circular.

If the moon wasn’t captured and didn’t break off from the earth, could both have formed side-by-side from a cloud of gas and dust? This is known as the nebular, sister, or condensation theory.

The problem? Gas clouds tend to dissipate unless compressed together by some major (and unknown) outside force. Even if such a force existed, it would require both the moon and the earth to grow at exactly the same rate while maintaining the precise speed of rotation in order to avoid colliding together or drifting apart. 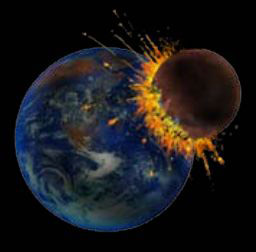 The most widely-accepted naturalistic theory, the giant impact theory, states that a Mars-sized object struck the earth, throwing massive amounts of debris into Earth’s orbit. Later, the earth slowly regained its shape and the debris coalesced into the moon.

One major problem, according to DeYoung and Whitcomb, is the earth’s Roche limit. In 1849 Edouard Roche demonstrated mathematically that if a moon was too close to it’s planet (within 2.44 planetary radii), the planet’s gravity would exceed the moon’s and essentially pull it apart. Thankfully, our moon is 21 times as far away as the breakup distance.

Considering the precision required to establish a moon-planet relationship, naturalistic origin theories face some  formidable questions. With over 100 solar system moons, this is compounded even more.

Originally published in the March/April 2011 issue of Think & Believe newsletter.