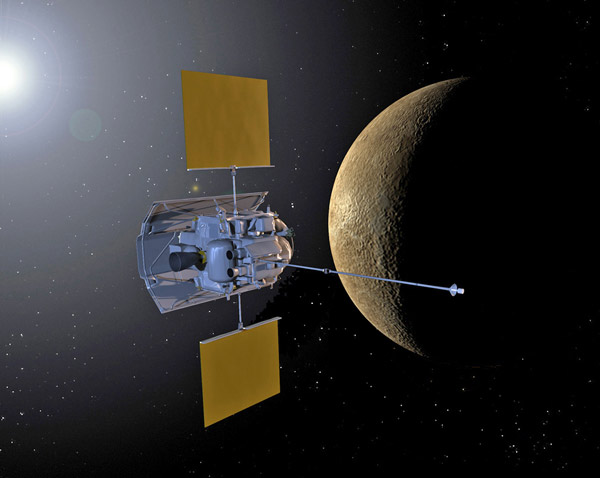 On March 17, the Messenger spacecraft entered orbit around Mercury.  This begins the first-ever orbital study of the planet. Creationists are eagerly awaiting the results of the Messenger mission. Among other things, this probe will map out Mercury’s magnetic field in much more detail than we had before.

In my Solar System DVD, I explained that if Mercury were really billions of years old, it shouldn’t have a magnetic field. Nevertheless, it does. This makes Mercury look young, and contradicts the secular model of origins. Evolutionists have proposed a variety of excuses for Mercury’s magnetic field. We won’t discuss them here because the excuses create more problems than they solve. But there’s one thing that even the excuses can’t handle, and that’s a rapid decay of the magnetic field. If Mercury really had a stable magnetic field for billions of years, it shouldn’t be decaying rapidly today. Nevertheless, that’s exactly what it appears to be doing.

This fits perfectly with a young Creation model. In fact, it was predicted by creationary physicist Dr. Russell Humphreys a number of years ago. Preliminary data from Messenger indicate that Dr. Humphrey’s prediction might even have been too conservative. The decay rate might be even higher than he predicted. [Mercury’s Magnetic Field is Young] (This would make the problems for the evolutionary model even worse, if that’s possible.) However, the data are still preliminary. That’s why we’re eagerly awaiting the definitive measurements that Messenger will be doing.

Evolutionists often scoff that creation science makes no testable predictions. Planetary magnetism is a great example of why they’re wrong. (Nor is Mercury the only planet where creation based predictions Have been right, and evolution based predictions have been wrong.) The Messenger mission promises to be very fruitful for a creationary understanding of the Solar System.

Also published as an article in the May/June 2011  issue of Think & Believe newsletter.