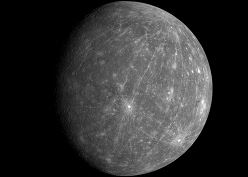 A few weeks ago, the Messenger spacecraft completed its first extended mission around Mercury.

Before Messenger arrived at Mercury, most of what we knew about the planet came from one space probe (Mariner 10), back in 1974 and 1975.

Thus, both creationists and evolutionists alike were eager to see what would be revealed by the Messenger mission–the first spacecraft to visit Mercury in over 30 years.

Messenger has been an exciting mission in many ways, especially for creationary scientists. 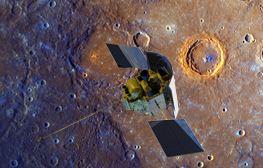 In fact, it’s not exaggerating to say that Messenger’s discoveries have delighted creationists – even more than we originally expected.

On the other hand, Messenger has challenged the secular model for how Mercury formed – the idea that Mercury (and the rest of the Solar System) formed from a cloud of gas about 4.5 billion years ago.

Even before Messenger arrived at Mercury, it was known that Mercury doesn’t conform to the secular model. I discussed this in my Solar System DVD.

(One secular scientist has actually called1 Mercury a “red herring” and a “trap” for secular modellers, because it causes so many problems for people trying to explain how the planet got here without a Creator.)

Therefore, evolutionists were hoping that Messenger would solve their problems with Mercury.

Instead, it’s made them even worse.

As I explained in my Solar System DVD, Mercury is very dense. This creates a problem for secular astronomers: their model says Mercury could not have formed with such a high density.

Therefore, most astronomers have believed Mercury originally formed with a much lower density. Soon afterwards, a ‘giant impact’ occurred, when a large asteroid crashed into Mercury.

Afterwards, the low-density stuff just wandered off into space somewhere, leaving only the high-density material behind.

According to secular astronomers, this is why the planet has such a high density today.

Is there any evidence for this contrived story? Only that if it’s not true, the secular model can’t explain Mercury.

In other words, secular astronomers just have faith that it happened.

Unfortunately for them, Messenger has shown that their faith was misplaced. For one thing, we’ve discovered that Mercury has a lot of volatile elements, such as sulfur and potassium. However, if a giant impact had occurred, these volatile elements would have been vaporized and escaped into space. They wouldn’t be there today.

Since they are there today, this means a giant impact never occurred.

And that means secular astronomers can’t explain how a small but high-density planet like Mercury can exist. Their model says it shouldn’t. But it does.

Along with contradicting a giant impact scenario, Mercury’s volatile elements cause other problems for the secular model.

For example, Mercury is the closest planet to the Sun. The secular gas-cloud model says that at this close distance, temperatures would (obviously) be high, so only certain elements could have condensed out from the cloud.

Conversely, other elements could not.

One of the elements that couldn’t have condensed out of the cloud is sulfur. Therefore, if Mercury had formed from such a cloud, it wouldn’t have any sulfur on it.

But it does. (In fact, Mercury has a higher concentration of sulfur than any other rocky planet.)

Secular astronomers are now spinning tales of how Mercury must have formed elsewhere in the Solar System (where sulfur could have condensed), and then migrated inwards to its present location.

Another Messenger discovery was these “blue hollows”: blue pits and depressions, up to a few miles across. 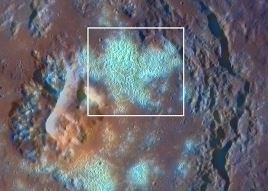 These have been called “this jaw-dropping thing that nobody ever predicted.”2 We aren’t certain what causes them, but they seem to be the result of volatiles escaping Mercury’s surface.

Many of these hollows appear quite fresh. Apparently, whatever process creates them is still going on today in some places.

If Mercury were really billions of years old, geological processes like these would have ceased long ago. Mercury was supposed to be “an old burned-out cinder.”2

But these hollows make Mercury look quite young.

Along with creating new problems for secular models, Messenger fanned the flames of some old ones.

In my Solar System DVD, I described how the Mariner 10 spaceprobe discovered that Mercury has a magnetic field – even though, according to the long-ages model, it shouldn’t.

Yet again, evolutionists were forced to make excuses for why the planet didn’t fit their model.

Conversely, this magnetism fits the Creation model quite well. If Mercury was created recently – say, six to ten thousand years ago – it could still have a primordial magnetic field.

In fact, Dr. Russell Humphreys (a Bible-believing physicist) realized that Mercury’s magnetism had some exciting implications.

Back in 1984, Dr. Humphreys had published3 some predictions about planetary magnetism, based on a Biblical passage (2 Peter 3:5) about the creation of the Earth and heavens.

His predictions were spot-on. Years before any spacecraft visited Uranus and Neptune, he successfully predicted the strengths of their magnetic fields.

(In contrast to this, the secular predictions were wrong, especially for Uranus, which had a field strength about 100,000 times stronger than evolutionists had predicted.)

Dr. Humphreys also noted that Mercury’s magnetic field – the field that secular astronomers couldn’t explain – fit his model quite well. He predicted that once Mercury’s field was measured again, it would be found to be decaying at a fairly quick rate.

From a secular perspective, this prediction was silly. Although evolutionists couldn’t explain why Mercury has a magnetic field, they were still confident that Mercury was 4.6 billion years old.

Therefore, whatever the source of the field may be, it must be stable – because it has lasted 4.6 billion years.

But when Messenger arrived at Mercury and started taking measurements…

This works out to a half-life of about 320 years. In other words, Mercury loses half its magnetic field strength every 300 years or so. This is an astonishingly quick rate for an entire planet.

On the other hand, it thoroughly contradicts secular expectations.

Mercury: A Testimony to Creation

Over and over, Mercury has confounded predictions from evolutionists, while delighting creationists.

As this newsletter issue is being published, NASA is trying to get funding to extend the Messenger mission for another two years.

In a time when the US government has accumulated a gargantuan debt, it’s difficult to justify unnecessary expenses.

But if Messenger’s funding gets extended anyway… I for one won’t mind.

As originally published in CREATION ASTRONOMY NEWS – Volume IV, #1 (sign up for the newsletter at his website) reprinted with permission from the author.