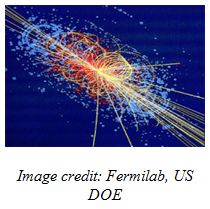 Yesterday (originally posted last week by Spike), a momentous announcement was made by scientists working at the LHC (Large Hadron Collider) in Europe.

The Higgs boson has been discovered. (Or at least, there’s a new particle consistent with the characteristics expected of the Higgs.)

Media reports are breathlessly calling it “the God particle.” Other reports claim that this discovery confirms the Big Bang model.

Neither statement is true.

What is the Higgs boson? It is one of the fundamental particles in physics. These are believed to be the building blocks of everything else.

Specifically, the Higgs boson is the particle associated with the Higgs field – the current model explaining how matter has mass.

The Higgs boson is an important part of the so-called Standard Model of particle physics. Without it, the whole model falls apart.

Now that the Higgs boson is supported by data, particle physicists are breathing deep sighs of relief.

So much for the God particle. What about the claim that this boson confirms the Big Bang?

Without the Higgs, the Big Bang model would be in deep trouble.

But the opposite is not true. Even if the Higgs boson exists, this doesn’t require that a Big Bang happened.

The Standard Model of particle physics is the most popular model (at the moment) for how the Universe works at a fundamental level.

However, it doesn’t tell us anything about where the Universe itself came from.

Nevertheless, there are many media reports trying to convince you otherwise. Since the evolutionary worldview is based on the Big Bang, evolutionists will interpret the LHC announcement as support for it.

Somehow I doubt that news reporters will include that last point in their stories.