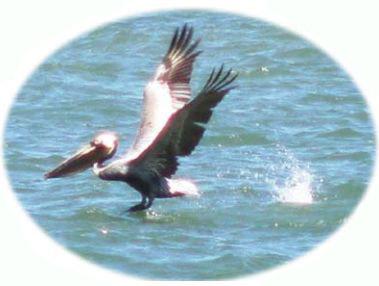 The Jones family was crossing Galveston Bay by Galveston, Texas on the car ferry. They had left their car on the parking deck and climbed the stairs to the observation deck.

“Mom and Dad! Look!” Billy pointed and shouted. “A big bird just crashed into the water!”

“It didn’t crash, Billy,” laughed his mother, Mrs. Jones. “That is a Brown Pelican, and it is fishing. Watch … it just tipped its beak up and swallowed a fish.”

“You mean he caught a fish?” asked Billy.

“Yes, Billy,” said his father. “Pelicans are mainly fish-eaters, although some have been known to also eat some shellfish, usually shrimp.”

“They are a big bird, so it must take a lot of fish to keep them alive,” said Mary.

“If there are 8 different kinds of pelicans, how do you know these are Brown Pelicans?” asked Mary.

“But Dad, I want to know how they are catching fish!” exclaimed Billy.

“Okay, Billy,” chuckled Mr. Jones. “Brown Pelicans are found along the ocean shores and not on inland lakes. They are the only pelicans that plunge from the air into the water to catch its food. God gave them very good eyesight. Flying as high as 60 to 70 feet (8.28 – 21.33 m), they can spot a school of small fish or even a single fish in the water below. Diving steeply, the pelican plunges headfirst into the water, going completely or only partly under – depending on how high they dive – then comes up with a mouthful of fish in a special flexible pouch beneath its bill.”

“That has to hurt! Water is not that soft. It hurts my head when I dive headfirst into a swimming pool from the high springboard,” added Mary.

“Well Mary, God thought of that too. He designed the Brown Pelican with air sacs beneath their skin that softens the impact and helps them float back to the surface. The pouch holds the catch of fish until the water is squeezed out. Their pouch actually holds more water than their stomachs … 3 gallons (11.4 l) in the pouch compared to only 1 gallon (3.8 l) in the stomach. Once the water is drained out, the pelican throws its head back and swallows the fish. Sometimes the adult pelican will carry the fish in their throats and then vomit the fish back into the pouch. Their baby pelicans will then eat the spit up fish from this handy feeding trough. The pouch also serves as a cooling tool in hot weather.”

“Mom and Dad, look! That pelican just dove into the water and got some more fish!” cried out Billy.

“What is that sea gull doing? He is sitting on the back of that pelican!” exclaimed Mary.

“That is a laughing gull and he is waiting for a chance to steal a fish or two before the pelican can swallow.”

“Look. There is a flock of ten Brown Pelicans flying together,” pointed out Mrs. Jones.

“Pelicans are rather clumsy on land, but they are one of God’s amazing flying machines. They fly with their necks and heads folded and resting on their backs. Brown Pelicans can effortlessly glide low over the water – so low their wingtips often brush the waves – with occasional slow, powerful wing beats to gain speed. Many times they can be seen flying in a single file formation, like the ones we are watching, following the lead pelican, with perfect precision, “explained Mr. Jones.

“I think they fly as well as or even better than the United States Navy’s Blue Angels that we saw at an air show earlier this year,” replied Mrs. Jones. “Man invented airplanes, but the idea of flight and flying machines came from the study of birds … God’s airplanes … wonders of flight!”

Originally published in the May/June 2011 issue of Kids Think and Believe, Too! Check it out for activities and a maze.