Posted by Alpha Omega Institute on Dec 20, 2013 in Books and movies we like, Think & Believe Newsletter | 0 comments 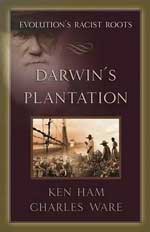 Was Darwin a racist?  Even though he was an abolitionist, most seem to agree that by today’s standards, he certainly held racist views.  You be the judge:

The Origin of Species is subtitled The Preservation of Favored Races in the Struggle for Life. A summary of some of Darwin’s points from The Descent of Man include:

Regardless of what the faithful followers of Darwin say, it is obvious how these ideas from Darwin’s writings certainly contributed to many atrocities in the name of evolution.

Darwin’s Plantation, by Ken Ham and Charles Ware, clearly shows the racist roots of Darwinian evolutionism and the devastating consequences when this philosophy is put into action.  The book opens with the gripping account of Ota, a bushman from Central Africa whose family and friends were massacred because of evolutionary racism.  Later, Ota was actually exhibited in a zoo in New York.  Charles Ware gives examples of how evolution became the scientific justification for racism, discrimination, euthanasia, and even genocide.  Then Ken Ham discusses the true origin of the species from a Biblical and scientific viewpoint.

The book ends with a note of hope on how Christians can be involved in bridging the gap through true Biblical knowledge, grace, and compassion.  We highly recommend this clear and understandable book which offers solutions to a very complex topic.

Originally published in the September/October 2008 issue of Think and Believe.