An “Earthshaking” Discovery on Mars

From the here-we-go-again department: 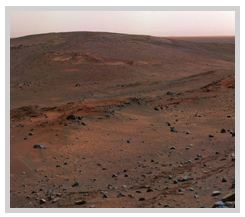 A NASA scientist recently announced a major, “earthshaking” discovery on Mars.  According to an interview1 with John Grotzinger, the principal investigator for NASA’s current Mars rover mission, the rover had analyzed some Martian soil. And it had made an “earthshaking” discovery. Grotzinger even said “this data is [sic] gonna be one for the history books. It’s looking really good.”

James Garvin, chief scientist at NASA’s Goddard Space Flight Center, said2 there were “unprecedented measurements of solid material samples with incredible implications about Mars” (emphasis added). The media were all a-quiver with excitement. What had NASA found? Evidence of life? What else could be “earthshaking” and “one for the history books”?

We’ve been down this road before. Remember the big announcement in 2010 about NASA’s “major” discovery that had “implications for the search for life elsewhere in the Universe”? That turned out to be some germs in a lake in California. Even many secular scientists were scornful of that one. Before that, there were the “alien fossil bacteria” found in a meteorite in Antarctica. That one got debunked, then came back, then got debunked again. If you’re old enough, you might even remember the controversy surrounding the original Viking landers in the 1970s, which were claimed by some to have found life.

Of course, this is absurd. Science has shown over and over that “abiogenesis” is impossible: that life cannot form from non-living chemicals. That’s true on Earth, it’s true on Mars, and it’s true everywhere else too. The discovery of life somewhere else would merely prove that it exists somewhere else. “Life exists over there” would not prove “Life evolved by itself over there.” As I’ve said before, the discovery of life elsewhere would merely increase the number of places where evolutionary models can’t explain it. Nevertheless, most evolutionists refuse to accept this. But even then, life on Mars still wouldn’t confirm abiogenesis.

It’s been understood for quite a while that large meteorite impacts on Earth can spray debris up into space. Some of that rubble could eventually find its way onto Mars. And if that rubble contained bacteria—which can survive in space—then the Earth could “seed” Mars with life. (Obviously, this isn’t very likely. But it isn’t impossible.)

So if life were found on Mars, that wouldn’t mean it formed there from some primordial Martian ooze. It could just be contamination from Earth. And it would do absolutely nothing to help rescue evolutionary theory from the impossibility of abiogenesis. Despite this fact, we still have periodic feeding frenzies in the media, where somebody reports on an “earthshaking” discovery and everybody gets excited about it. In the most recent case, after Grotzinger caused a big fuss about his discovery that would be “one for the history books,” NASA was forced to back down.

In a statement, NASA said, “Rumors and speculation that there are major new findings from the mission at this early stage are incorrect.” In fact, there wasn’t really anything new from the rover. The recent soil analysis had found some water, sulfur, and perchlorate. These had all been found before. As mission scientist Ralf Geller commented, “This is typical, ordinary Martian soil.”

Then what was Grotzinger talking about then? Well, that was just a “misunderstanding,” NASA said. He was just saying the rover mission itself would be one for the history books. Notably, no explanation was given for Dr. Garvin’s excitement about “measurements with incredible implications about Mars.” Apparently that was just a big misunderstanding too.

Perhaps a better explanation was provided in Grotzinger’s original interview with National Public Radio. As the reporter noted1:

“NASA would love to trumpet a major finding, especially at a time when budget decisions are being made.”

This is a lesson to all of us. The next time an “earthshaking” discovery is announced, don’t buy into the hype. Wait and see what was really discovered, and what the (ahem) “incredible implications” really are. There’s a larger issue at work here too. Many evolutionists are so excited about the search for extraterrestrial life, that it’s fair to say that they have a religious fervor about it. But why should that be? After all, according to the secular origins model, we’re all just a bunch of rearranged molecules left over from the Big Bang.

Ultimately, for the atheist there’s no meaning or purpose to life. The Universe all formed by accident anyway, and whatever life is within it all has the same ultimate fate: oblivion.

So why should we get excited about some molecules on Mars that maybe are arranged in a more complicated configuration—i.e., “life”—than we originally thought? It’s all meaningless anyway. Despite this, evolutionists are intensely passionate about finding life anyway. Apparently it’s not meaningless after all. That’s because, as Romans 1 says, in their hearts they know there is a Creator. And they’re desperately searching for some excuse to deny Him.

Originally published in CREATION ASTRONOMY NEWS – Volume III, #3 (sign up for the newsletter at his website). Reprinted with permission from the author. http://www.creationastronomy.com/