Posted by Alpha Omega Institute on Oct 8, 2013 in Johnsons from the Front | 0 comments 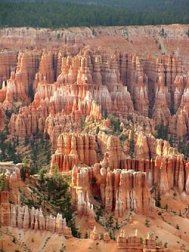 In Bryce Canyon National Park (located in the High Plateaus region of the Colorado Plateau in Utah) are some amazing rock pillars called ‘Hoodoos’. These hoodoos have wondrous, fantastic shapes that a person could spend hours viewing.

How were these hoodoos formed … here is a quote from a web site on the geology of Bryce Canyon: “The chaotic destructive force of water, not wind, is responsible for the fantastic shapes in Bryce Canyon. Bryce Canyon’s Hoodoos formed over thousands of years by the same processes that form the features of surrounding parks.

Water, ice and gravity are the forces at work in Bryce Canyon National Park. These three forces coupled with the differential erosion of the Claron Formation produces a different morphology than that of any other area in the world.” 1

September 2013 saw much flooding in many western states. On a trip to Albuquerque, New Mexico, during these heavy rains, we saw much evidence of flooding – rivers and streams overflowing their banks, homes flooded, flooded and muddy roads, washouts, and drainage systems clogged by floating plant debris.

One of the amazing things we viewed were what appeared to be ‘hoodoos’ like those of Bryce Canyon. However, these were made in a very short time … only days! (See Pictures Below)

These new hoodoos were made by water flowing in packed soil. Makes you wonder …

does it really take thousands of years for hoodoo formation? 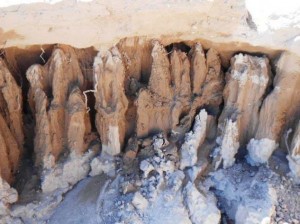 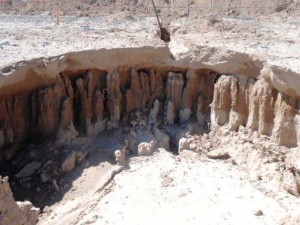 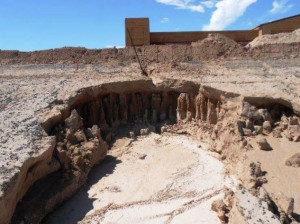