The Human Brain – A Problem for Chance an Accident

Posted by Alpha Omega Institute on Aug 29, 2013 in Johnsons from the Front | 0 comments 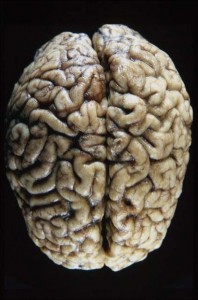 In my last blog (The Mind Boggling Speed of the Human Brain) I wrote about the incredible speed of the human brain  … a man-made supercomputer (consisting of 82,944 processors … only 1 per cent of the neuronal network of a human brain) completed in 40 minutes the equivalent amount of activity that is observed to take place in the living brain within one second! To put that in perspective, that supercomputer is the equivalent of 250,000 personal computers.

Yet the human brain, weighing in at only three pounds, can do the work of 1,000 super computers. The brain doesn’t need an external power source or cooling system because it makes its own electricity and operates with chemicals and only microvolts of power. If the brain’s estimated 10 trillion cells were placed end to end in a single line, that line would be over 100,000 miles long!1

The human brain has an estimated ten billion neurons (specialized impulse-conducting cells) and billions upon billions of connections.2

Computers are the product of incredible design, yet they cannot even begin to compare with the efficiency or complexity of the human brain. Is it really reasonable to believe that only time and accident could design such a marvelous structure? The evidence points to a designer, not to chance and accident!