0 ItemsCheckout
Main Menu
Site Menu
Home » Articles » Books and movies we like » Did the Continents Split in the Days of Peleg? »

Did the Continents Split in the Days of Peleg?

Posted by Alpha Omega Institute on Jun 13, 2013 in Books and movies we like | 4 comments 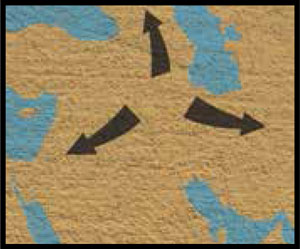 Some Christians have suggested that it means the dividing and separating of the continents occurred during the life of Peleg, but there are some major reasons to reject this idea. The following are taken from Bodie Hodge’s book, Tower of Babel: The Cultural History of Our Ancestors (pp. 98-99).

1. When Genesis 10:25 is read within the context of the whole of Genesis 10, the four other verses (5, 18, 20, and 32) speaking of the division clearly emphasize that this was a linguistic and family division of all post-Flood people into different lands (geographical locations).

2. Had the division of continents occurred during the days of Peleg, then the associated catastrophism would have resulted in another worldwide Flood, in violation of God’s specific promise to Noah. [Note: This would have happened due to earthquakes and tsunamis generated by catastrophic movement of continents.]

3. Had the division of continents occurred during the days of Peleg, then the ark (with Peleg’s ancestors) would have had no place to land, as the mountains of Ararat produced by continental collisions would not have yet existed.

4. There is tremendous fossil and geologic evidence for continental division having occurred only during the Flood.

Originally published in the May/June 2013 Think and Believe newsletter.