0 ItemsCheckout
Main Menu
Site Menu
Home » Articles » Books and movies we like » New Book: God and Stephen Hawking: Whose Design Is It Anyway? »

New Book: God and Stephen Hawking: Whose Design Is It Anyway?

Posted by Alpha Omega Institute on Sep 1, 2011 in Books and movies we like, Nuttings from the Front | 0 comments 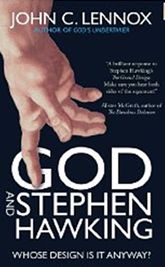 Dr. John Lennox, a professor of mathematics from the University of Oxford, just released a short 96 page book which challenges Stephen Hawking and his book, The Grand Design. Hawking, the very popular and “prestigious” atheist scientist, claims that the laws of physics themselves brought the Universe into being, rather than God.

Lennox’s book is titled God and Stephen Hawking: Whose Design Is It Anyway? A review of this book gave the following quotes from page 32:

“What all this goes to show is that nonsense remains
nonsense, even when talked by world-famous scientists.”

Having been familiar with Lennox’s down to earth way of unraveling scientific and philosophical nonsense, I ordered the 96 page book today. From my experience of speaking on the university campuses and interacting with “elite” professors and their student protégés, I certainly can echo those quotes. I also wish those “parroting” students would understand that they are being snowed by prestige and arrogance rather than sound logic and verifiable science.

I hope the book arrives quickly as Mary Jo & I are scheduled to speak at 4 universities in a few weeks where I fully expect Hawking’s faulty logic and book will be touted as the latest “science.” It will be good to show the students that Hawking does not have the final word.

Elephants are mutating or changing just not evolving! creation.com/elephants-losi…

This is SO CRAZY!! - - HOW COULD THIS EVOLVE?! Tremendous faith is required to believe that evolution caused this complex and incredible butterfly life cycle with its interdependence between different forms of life. A wiser faith trusts... For More: discovercreation.org/blog/202…