The Mind Boggling Speed of the Human Brain

Posted by Alpha Omega Institute on Aug 16, 2013 in Johnsons from the Front | 0 comments

‘the most complex structure in the known universe, complex enough to coordinate the fingers of a concert pianist or to create a three-dimensional landscape from light that falls on a two directional retina’ … ‘the current version [of the brain] is the result of millions of years of evolution. It is difficult to understand the brain because, unlike a computer, it was not built with specific purposes or principles of design in mind. Natural selection, the engine of evolution, is responsible.’ [Emphasis added] 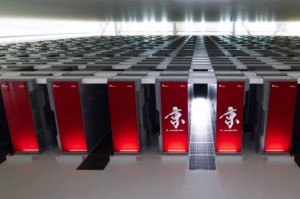 A network consisting of 1.73 billion nerve cells connected by 10.4 trillion synapses has been created using the power of a Japanese supercomputer.

Despite being the biggest neuronal simulation to date, the process requiring 82,944 processors only represented about 1 per cent of the neuronal network of a human brain.

The supercomputer completed in 40 minutes the equivalent amount of activity that is observed to take place in the living brain within one second.

The teams from the Okinawa Institute of Technology Graduate University (OIST), Japan, and the Research Centre in Julich, Germany, ran the advanced simulation software NEST on the Japanese K supercomputer, capable of processing 8 petaflops3 of information per second.

… Overall, the experiment needed memory equivalent to that of 250,000 PCs.” [Emphasis added]

I wonder if today, based on information we know now, Mr. Fischbach can seriously say that the human brain was not built with design in mind … even our very complex brains cannot engineer a computerized brain that even comes close to the mindboggling speed of our brains. The evidence points to a brain that was engineered by a designer, not to a brain that could have happened by random chances and accidents (‘Natural selection’), even given ‘millions of years’ of so-called-time.

Here is a great article showing the challenges that Creation ministries face and the joy of being able to work together with rightful attitudes to share God’s Truths with others. What a joy it is to glorify our great Creator. Thank you @ICRscience! icr.org/article/unity-…

Concretions are quite common in sedimentary rocks and they appear to be challenging to slow evolutionary formation and more clearly point to having formed in the Global Flood. See here: creation.com/rapid-concreti… Also see fossil trackways: youtube.com/watch?v=nYTj8P…

“The existence of salt lakes and inland seas provides strong evidence that there has been a global Flood...How did seawater get so far inland? Why did it not... discovercreation.org/blog/202…

Is God Cruel? This question comes from atheists and our own doubts at times. Check out this article for more details: answersingenesis.org/who-is-g…

Where did Cain get his wife (Gen 4:17)? A: See Genesis 5:4. Adam “begat sons and daughters.” At that time, the genetics were purer so there was no problem with having children with close relatives and there was no cultural stigma at that time that you couldn’t marry a relative. pic.twitter.com/MlohEDmVcC

A Fish Giving Live Birth! – Is it an Evolutionary Leap?? “Contrary to journalistic hype, this case provides no insights into the supposed ‘evolutionary leap’ between egg-laying and live birth.3 In fact, Mary’s pregnancy was on the verge of... discovercreation.org/blog/202… pic.twitter.com/wDifexSmcL

@CheapPhilosoph1 The picture is just an example of wood. Read about the evidence in the article.