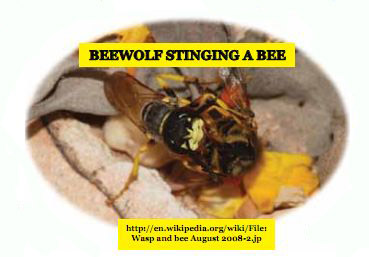 Beewolf … you might guess that it is a bee that looks like a wolf or maybe a wolf with stripes like a bee … but it is neither. A beewolf is a special kind of wasp found in the United States, Europe and Northern Africa that hunts (like a wolf) bees.

Beewolves do not live with other wasps; rather they live alone. In the late spring or early summer, the female beewolf (also known as a digger-wasp) digs an underground tunnel in sandy ground. At the end of her tunnel, she builds a nursery chamber (room) in which she will later lay an egg. When the tunnel is completed, the wasp goes hunting for bees.

The mother beewolf is not looking for bees to eat. She is hunting bees for her babies to eat. The adult beewolf eats nectar from which it gathers from ﬂowers or from honeybees which they squeeze the nectar out of after paralyzing.

When the mother beewolf finds a small bee or even other wasps, she stings it between the bee’s front legs. The sting does not kill the bee, but it makes the bee unable to move (paralyzed). The wasp then grabs the paralyzed bee with her middle legs, and then drags the bee back to her tunnel. The beewolf uses her memory to ﬁnd the tunnel.

After the mother beewolf deposits the bee in the nursery chamber, she goes hunting for other bees. It takes several bees to feed one baby (larva) beewolf wasp. She will gather up to ﬁve bees for each chamber. 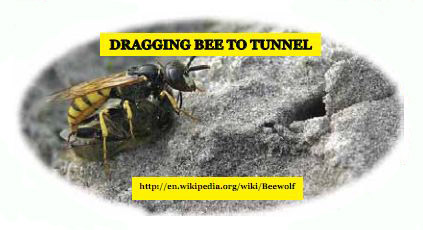 When the mother beewolf has collected enough bees, she lays an egg on one of the paralyzed bees. She then leaves the room and seals the tunnel off with a door. She will then build more tunnels with rooms and hunt for other bees.

When the egg hatches, the larva (baby) eats the bees- remember these bees are still alive – its mother has left behind. The living bees are baby food! The baby beewolf feeds on the living bees and grows until it reaches the right size. The larva then climbs to the top of the nursery room, attaches itself to the ceiling, and forms a cocoon around itself. There it will hang for 4 to 9 months while its body changes into an adult beewolf.

Scientists have discovered that the mother beewolf has organs (glands) on her antennae that carry a special type of bacteria. The bacteria make 9 different kinds of antibiotics (like medicine) that protect the larva.

Before the mother beewolf lays an egg, she smears a spot of special bacteria (it looks like white goo) in the nursery room. The newly hatched baby then crawls through the white goo, and the medicine the bacteria are making protects it from harmful diseases. When the baby beewolf spins a cocoon around itself, the good bacteria on its body gets spun into the cocoon, giving the baby protection as it changes into an adult.

Can evolution explain how the beewolf knew how to build an underground nursery? Can it explain where the beewolf got the amazing chemical that doesn’t kill but only paralyzes the bee? Can evolution explain the special bacteria or the medicine they can make? How could the beewolf have even had babies that could live without all this amazing design already working? No, the chance and accident of evolution could never come up with a wonderful creature like the beewolf. Only an intelligent Creator could create such wonder. That Creator is God!

Originally published in the January/February 2012 Kids Think and Believe, Too! Check it out for activities and a maze. 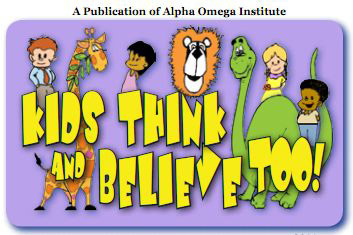